This is my second writeup from PlaidCTF this past weekend! It's for the Web level called kpop, and is about how to shoot yourself in the foot by misusing serialization (download the files). There are at least three levels I either solved or worked on that involved serialization attacks (mtpox, reeekeeeeee, and this one), which is awesome because this is a seriously undersung attack. Good on the PPP!

I'll start off with a quick summary of how vulnerable serialization happens, then will move onto specifics of this level.

Generally, when an attacker provides code for a service to deserialize, it's frequently bad news. Basically, at best, it lets an attacker provide values to protected and possibly private fields. At worst, it allows an attacker to control function pointers or overloaded operators that can lead directly to code execution.

In the case of PHP, you can't serialize functions, so it's harder to shoot yourself in the food. However, you can control private and protected fields, which is where this attack comes in.

There were so many classes with interdepencies, I got quickly overloaded. I'm really bad at visualizing programs. I ended up grabbing a whiteboard and going outside, where I produced this: 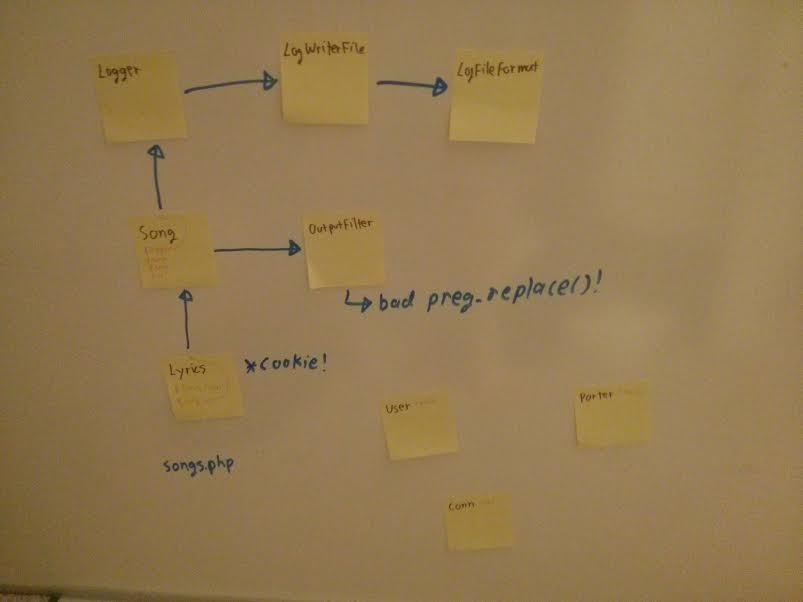 In retrospect, that was way overkill, but it was nice to get some fresh air.

My goal was to find every variable in every class that got serialized, and to figure out every function in which it was used. I knew that both the Lyrics class and lyrics strings got deserialized, one from a cookie and the other from a POST argument, and I also knew that Lyric contained references to a bunch of other classes (see the diagram).

My goal was cut short when I noticed the preg_replace() was being called with a string that I controlled via deserialization! I've many times told people to avoid putting attacker-controlled strings into a regular expression, because regular expressions do all kinds of crazy things. I headed over to http://php.net/preg_replace and, sure enough, found this note:

And on a linked page:

From there, I made a copy of classes.php called evil_classes.php, with the following changes:

Then I ran it, getting:

Yup, our evil regular expression is there! Now we just set the 'lyrics' cookie to that (I like using the Web developer addon for firefox), visit http://54.234.123.205/import.php (note: the address won't work after a couple days), hit 'enter' in the field, and watch the money roll in!