In addition to genius, whose writeup I already posted, my other favourite challenge I wrote for BSidesSF CTF was called launchcode. This will be my third and final writeup for BSidesSF CTF for 2019, but you can see all the challenges and solutions on our Github releases page.

This post will be more about how I developed this, since the solution is fairly straight forward once you know how it's implemented.

The idea came to me while my boyfriend, Chris, was playing a game on Steam Link. Due to an odd bug, while playing Dark Souls, the Steam Link kept shutting off. Eventually, we realized that even though the game was running, the Steam menu was still "in focus". That means that while he was playing the game, he was also moving around and clicking things on the menu. Very reminiscent of Clickjacking attacks.

I tried to figure out something I could do with this, and slept on it. The next day, I had an idea: I'd write a backdoor into Windows Calculator such that, when a special code was entered, it'd decrypt and display the flag. Just like Steam Link, you'd be entering the code in the background as you're doing calculations.

I really wanted some Windows reverse engineering challenges, not to mention oldschool software references, so this was perfect!

You can grab the patched binary and try it out, if you like! The code for that version is 9*4+0839, and the flag looks like this: 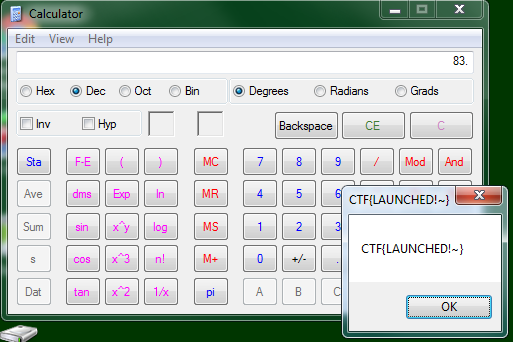 I initially tried using c:\windows\system32\calc.exe from Windows 7, since that's the version I had handy. I found the place where I wanted to add the custom code, then made a small change to make sure it'd work, and it started crashing immediately. Even changing a simple string prevented it from starting. I'm assuming it was due to code signing, but I'm not 100% sure. It also required the en/ or en-US/ folder to be present, which was annoying. I quickly gave up on that.

I decided to use Windows 2003 instead. I had the ISO for the OS handy, but didn't really want to install it. I had no idea how Windows was packaged, so I just mounted the iso:

Then explored the filesystem:

Apparently I already had cabextract installed, so I tried it:

Huh, that was easy! You can download the base calc.exe if you want to follow along pre-modification.

Finding a place for code

I spent a lot of time coming up with ideas of how to backdoor calc.exe. I could have used a tool like Backdoor Factory, but that wasn't quite right! I also had the idea of using debug hooks and causing exceptions to gain control, but I couldn't get that to work.

Instead, I decided to find a place right in the binary where I could put a decent chunk of assembly code - like 150 bytes or so - that could handle all the logic. Then I'd just find the part of the code that handles "button pressed", and call my backdoor code. That way, each button press, I could do some arbitrary calculation, then return control as if nothing had ever happened.

The question is, where? How do I spot useless code? In particular, in an executable segment?

I scrolled around for awhile, trying to think of where to put it. Then I noticed this:

__security_check_cookie()? Who the heck needs a stack cookie for Windows Calculator, right? What are you going to do, hack yourself? :)

So I went ahead and changed the first byte of the function (0x01007E2C is the virtual address, or 0x722c in the file) to 0xc3 - ret. Then I ran calc.exe and verified that everything still worked. In theory, it's slightly less secure - hah.

Finding a place for data

Next, I needed a part of memory that I can read/write to store the encrypted flag (so I could decrypt it later). There are plenty of easier ways to do this - such as by decrypting it on the stack - but this seemed easy enough to do. I also needed a smaller piece of unused memory to store the count (which is incremented each time the correct button is pressed - we'll see that later).

In the start() function, I noticed this code:

I don't care about terminal stuff, so maybe I could just kill that code and use that memory? While writing this blog, I actually looked up what initterm is, and realized that it isn't even doing anything - it just points to two NULL addresses.

So I went ahead and NOP'ed out that code, so those two memory addresses would remain untouched. Then I set the value at that address to 0x0000000, to initialize the counter (although I think it already had that value).

I solved that problem by overwriting random unused-looking chunks of memory until calc.exe could start and avoid crashing. Probably not the cleanest solution - I may have redefined math as we know it - but it did the trick! That memory ended up starting here:

AFAICT, that data is never read (but it's certainly possible I'm wrong). I initialized that to the "encrypted" version of the flag, which is simply the 32 byte flag XORed by the values for certain calculator buttons - we'll see that later.

Find where button presses are handled

Now that we have space for code, how do we run the code?

In the end, I literally just sorted the list of functions by length, and looked at the longest one: sub_10028A1.

Then I clicked on '0', and execution stopped! I used r esi to see the argument:

Then I tried again with pressing '1':

I'm not 100% sure what those first two lines are doing, and I still don't really know, but I do know that if I NOP out that code, everything still works. Perfect! I assume it's part of the "this execution is taking too long" code, since that stopped working when I added this patch. But we fix that later. :)

The space I freed up for my code starts at 0x01007E2D - one byte past the start of __security_check_cookie, where we created a fake ret instruction.

I want to change call sub_1012AA0 to call sub_1007E2D. The first byte of the original call - E8 - simply means "call a 4-byte relative address". The next 4 bytes are the offset from the start of the next instruction to the instruction we want to call (as little endian).

Of course, right now there's just the remnants of the old function there, so if you call it, it'll crash. That brings us to the last major part - the payload!

The payload is the most important part! It's simply arbitrary assembly code that'll run each time a button is pressed.

When the counter reaches 8 - the length of the code - it runs the "decryption" code and pops up a MessageBox with the decrypted flag. The decryption code will XOR the first 4 bytes of the encrypted flag with the first byte of the code. The next 4 bytes with the next byte, and so on, until the 8 code bytes have decoded the 32 flag bytes.

Note: this is not particularly good encryption, especially since the key is stored in memory. Don't do that if you want real security! :)

You may note two odd things: first, we call MessageBoxW(). MessageBoxW() is the UTF-16 messagebox function in Windows. That means we need to use 2 bytes for every character of our flag. Why do we use that one? Because it's what calc.exe already imports - unfortunately, we can't easily get MessageBoxA() without using GetProcAddress() or some other trick.

Second, the expected code is set to "XXXXXXXX". In the patch.rb file, I actually generate the code entirely randomly, encrypt the flag with it, and dynamically fill in the flag and the code!

Here's what it looks like when I run the generator script:

It generated the code of +82*5738 - not quite so interesting, but that code is then written to 0x7236, which means it's written directly over the "XXXXXXXX" string!

All said and done, the patch is 115 bytes long (with no real attempt to optimized my assembly). Not too shabby!

Fixing "this calculation is taking too long"

One funny thing - I was forever getting "This calculation is taking too long, would you like to continue?" messages. I tracked down the code to display it, and figured out it runs in a separate thread:

By this point, I just wanted to go to bed (I wrote this whole thing in one evening!), so I literally just replaced that whole block of code - the pushes and the call - with NOPs. That thread no longer runs, and my problem is solved. :)

I still have no idea why I started seeing that.. presumably, I accidentally killed the reset-timer code.

Putting it all together

All said and done, here are all the patches I just talked about, all in one place:

We replace the call to get control of code execution; we disable stack cookies to free up code space; we disable console i/o stuff to free up data stuff; we overwrite the stack cookie function with realpatch.bin; we reset the counter; we copy our encrypted flag to probably-unused memory; we patch the code directly into the assembly; and finally, we kill the "operation is taking too long" thread.

Eight patches, and we have a cool backdoor in Calc! The coolest thing is, the flag and code are both generated dynamically. That means you can easily change the code and data and get your own encrypted flag!

I honestly haven't solved it myself, other than typing in the code to verify it works, but I talked to one team and asked how they solved it.

Their answer: "we diffed it with the real version, and the code stuck out like a sore thumb!"

Once you know where the hook is, the assembly code I posted above is pretty easy to reverse engineer for somebody experienced in doing CTFs. Just gotta debug it to figure out how the codes (like 0x7C) correspond to buttons ('0')!

2 thoughts on “In BSidesSF CTF, calc.exe exploits you! (Author writeup of launchcode)”